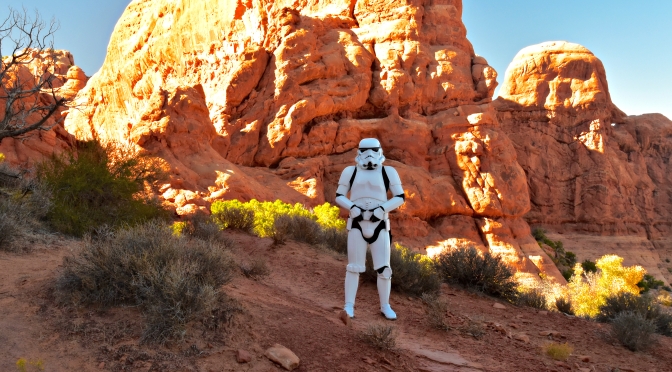 I met a Star Wars stormtrooper while hiking in Arches National Park. He was posing for his young son who was shooting photos  under a rock formation that looks strangely like Darth Vader. They had driven over from Colorado to get that photo (above).

That says a lot about the bizarre magnetism that Arches exerts on artists and adventurers – not just from the next state, but from all around the world.  There were buses full of tourists and hikers who were anxious to experience the otherworldly landscape that is reminiscent of the desert planet Tatooine in the Star Wars movies (those scenes were actually filmed in Tunisia).

My encounter with the movie character did not actually surprise me in the least as I rounded a bend in the trail on the back side of the North and South Windows.  I had actually searched for an affordable costume on Amazon when I was planning my expedition;  I could easily visualize a Star Wars character in this setting with no real stretch of the imagination.  The most authentic costumes were quite expensive and I ultimately built my own cowboy and Indian costumes instead, which also fit the desert theme.

A rock shaped like Darth Vader is only the beginning when one continues to explore the geological wonderland that is Arches.  The park sits on the huge seismic Moab Fault, but it must not have been active for a very long time or hundreds of these fragile formations would have collapsed by now.

I can only imagine how drastically the landscape will change if ever this region is jarred by a major earthquake.  The park holds more than 2000 arches and as many balanced rocks and in fact, a few of them collapse without provocation every year.

One of the most frail spans, Landscape Arch is longer than a football field but only 11 feet thick at its thinnest point.  Hikers are not permitted beneath the arch since a 70-foot-long slab fell from it a few years ago.  I noticed an awed hush among the hikers near the span, as though the slightest noise would produce a vibration that would end the structure.

Of course, the signature formation in Arches is the aptly named Delicate Arch, so famous a landmark that it appears on the Utah license plates.  It is as ironic as it is iconic, as the hike is all uphill and steep, making this famous place almost out of reach to the general population.

I found the view quite worth the hike.  This was one of two sunset hikes for me inside the park.  South Window, where I met the stormtrooper, was the other where I returned for nighttime photography.

While hiking back to the trailhead with a stormtrooper and his son, I was also scouting the landscape for some night sky photography and I was pretty sure I had found the best spot at South Window.  I checked the compass on my iPhone to discover that its orientation situated it crosswise to the Milky Way, which would be perfect for my picture, but of course, I wouldn’t know for sure until the sun went down.  Grabbing some supper in the camper, I then hiked back to the spot around behind the formation before sunset and waited for dark.

I had talked to other photographers at the trailhead and they were headed for Turret Arch and Double Arch, but when I reached my spot on the backside of South Window, I was all alone.

And I was not disappointed.

As the light faded, the Milky Way slowly came into view – exactly where I had predicted.  I set up the tripod, got the camera automatically doing its thing and then climbed up into the huge rocks to “paint” the arch with some warm light from an old dive light I had saved from my scuba diving years.  It had a soft diffused beam that would work better than a focused flashlight.

There is something truly awesome about being alone in the desert at night adding my own touch of artistry to the cosmic canvas.

For me Arches National Park lived up to its reputation as a land of intrigue and unforgettable experiences.   High hikes to fantastic panoramas,  encounters with other enthusiastic hikers along the trails, and a  dark night under the stars — after an encounter with a Star Wars impersonator — all added up to an epic life experience. 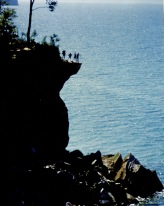 Join 96 other followers
Follow Where the Robert Meets the Road on WordPress.com