Everywhere we stopped along the Alaska Highway we met people, and here’s the thing:  They were all originally from somewhere else.  Texas, Utah, Ohio, Ontario, Ireland or parts farther removed, they gave varying answers to the first question that we all asked each other at every new stop: “Where are you from?”  Not until we reached the most remote settlements in the Yukon did we encounter the First Nation folks who would answer, “Here.  Always been here.”

The other unique trait of these immigrants to the great north was their eccentricity.  It seems that the sort of people who would answer the call of the wild are the sort that are essentially non-conformists.  Undaunted by solitude and the lack of conveniences, they had settled into the most unwelcoming locations this side of the border where services were limited and dangers were high.

Every roadhouse and lodge was operated by displaced or re-placed  – or maybe mis-placed wanderers.  We met RV park owners who had come out from the city to start a new life, we met university students working a summer job in the tourist industry, and there were cooks and heavy equipment repairmen helping to keep the outposts operating for one more season.

The other thing that was unusual about these unusual business owners was the quirky attempts they made at competing for the diminishing tourist dollars.  Chainsaw carvings were popular, Old West themed RV parks, the “world’s largest weathervane (a DC-3 airplane mounted on a post)”, a museum of stuffed trophies from musk-ox to moose, or left-behind WWII vehicles (the troop transport still operating for bear tours through the forests out in back).

So, one of the off-handed delights of the Road Trip of a Lifetime along the Alaska Highway is the quirky and tenacious proprieters of the entire 1,500-mile-long complex who are keeping it all going.

Or not.  Perhaps two-thirds of the lodges we passed were closed and boarded up, some a long time ago, some last year.  It’s a rough life up here, and it’s a rougher job trying to keep the outposts open when the tourist revenue is diminishing year by year.

We developed a deep appreciation for these tough folks who serve the would-be adventurers like us, keeping us safe for the night and fueling us up for the next stretch of highway.  Mighty good folks there, all along the way, and we enjoyed meeting them!

Here are a few more photos that we captured along our transit of the official 1,488 miles of the Alaska Highway from Dawson Creek BC to Delta Junction, Alaska:

We finally reached Denali, a day’s travel past the end of the Alaska Highway, beyond Fairbanks.  We have found a campsite right behind The Black Bear Coffee House where our daughter, Wendi, works every summer.  I’ll be writing about their transient lives next. 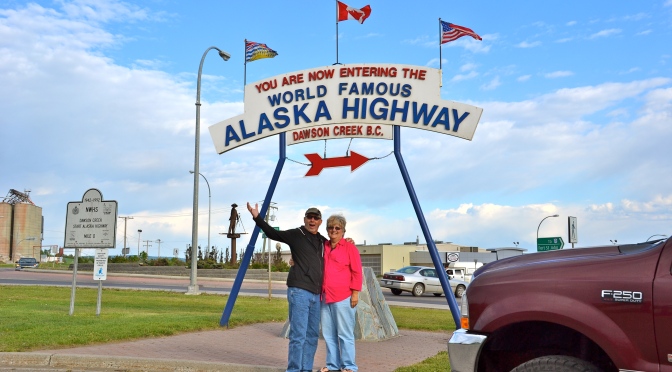 Today we made it to the official start of the Alaska Highway, Mile Zero, at Dawson Creek, British Columbia, Canada.  That is after driving 2,000 miles northward from where we spent the winter and spring near Los Angeles, California.  We’ve been on the road for eleven days, covering 1,300 miles up the west coast and another 700 after crossing the border into Canada.

We celebrated our arrival at the beginning by treating ourselves to a pizza in downtown Dawson Creek.  Then we hit the Safeway market to stock the fridge and cupboards for the big stretch across the mountains and tundra to Alaska.  It will take another week or more, and the outposts and fuel stops are few and far between.

The scenery has been beautiful, an ever-changing panorama from narrow rocky river canyons to hilly forested highlands to snow-capped mountain ranges.  We have churned our way up steep climbs, over passes, and then descended carefully down the other side.  We have passed through tunnels and crossed countless high bridges, marveling at the engineering feats pulled off by the early trail blazers.

Tomorrow we are hoping to put a bit more west in our northwest; it’s been heavy on the north so far.  In fact, the compass on the dash seemed confused today as we managed a twisting stretch around a mountain range and drove east instead of west; it was dizzying.

Tomorrows’ route is more straightforward, so we’re hoping to cover a lot of ground.  Denali is waiting for us.

We crossed the border into British Columbia yesterday and the border guard wanted to know where we were going.

“Alaska, where our kids live and work every summer,” I said.

“Do you know how far it is to Alaska?”

“And how long will it take you to get there?”

“We are allowing two weeks,” I replied.

“So you’re taking it nice and slow.”  He seemed satisfied that we knew what we were up against and waved us through.

Today I wasn’t so sure I knew what we were doing up here.

We are traveling northward through the rugged Rocky Mountains, and our winding route today took us through seven tunnels and over several passes.  There’s no easy way around it for the RV-er.  The easy way would have been to fly to Alaska, but it’s too late for that, and where’s the challenge in that anyway?  We must keep going.

It seems to be slow going for us with the formidable terrain we are facing these days.  We only covered about 150 miles today before we tired out and headed for a reprieve at a wayside RV park at Cache Creek, an old gold rush supply town that continues its service to wayfarers 100 years later.

Today I re-named this place “the land of 1,000 waterfalls,” because it seemed that every little stream we crossed was plunging to its death in some beautiful leap off a precipice.  The melting run-off has no other way to get to the mighty river below and eventually to the ocean.  Rather like us having no other way out of this canyon but to get back on the highway and head farther north tomorrow morning.

But at least if we are in the middle of nowhere, nowhere sure is beautiful! 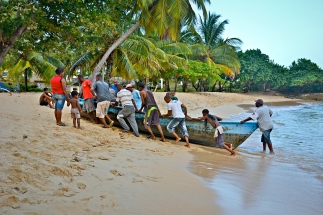 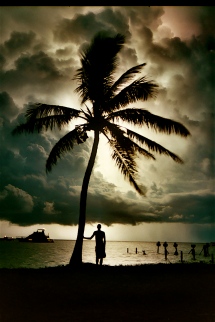 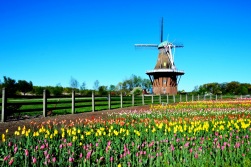 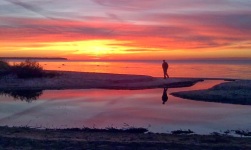 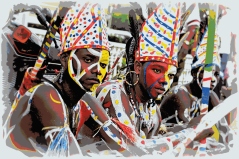 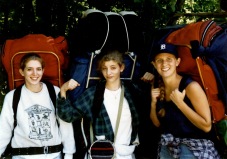